Omphisa fuscidentalis, the bamboo worm or bamboo caterpillar, is a bamboo borer. It is not the only insect considered as a bamboo borer, as there are beetles too. Omphisa fuscidentalis is the larvae state of the moth and the more delicate of the borers. For this reason it is used in entomophagy, which is the human use of insects as food. Although not as popular yet in the western diets like the United States, eating pupae, larvae and eggs of insects has been prevalent since prehistoric times. 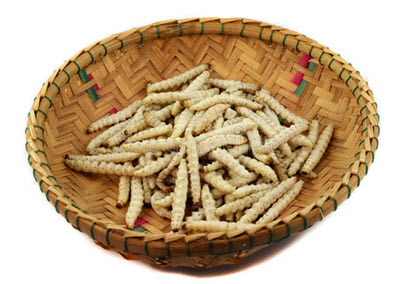 The bamboo borer gets its name from the bamboo groves it makes as its home in Asia. In Northern Thailand, Myanmar, Laos and in the Yunnan Province, the bamboo borer is at home in the lush forests of bamboo trees. The only thing interrupting its peaceful abode is the human desire for the worm as a delicacy by the locals.

Bamboo borer harvesters typically cut the shoot of the bamboo to find the caterpillars. They eat and live on the inside of the tree and can be found in large numbers inside the hollow plant. The moths lay their eggs in the bottom of the bamboo plant and the larvae eat their way up the shoot. When they are ready to exit the tree, they crawl back to the bottom where they started and bore through the bamboo to get out.

One of the most effective methods to harvest is to hack into the side of the bamboo shoot with a machete just at the internode, exposing just enough of the inside of the tree to see if it is inhabited by the worm.

Insect farming for bamboo borers takes place on bamboo plantations. In as little as 45 days, the worms can be found inside the shoots and will remain for as long as eight months eating the bamboo.

Mostly having a nutty flavor, the bamboo borer is usually deep fried and sold for human consumption. You will find them typically in the Asian open air markets, sold by street vendors or at temple fairs sold in bulk. Some people say that the bamboo caterpillar tastes like a Cheeto or a chip. Some cook it in a wok and enjoy it as a snack with a beer.

Deep fried caterpillars are also sold through other markets like online and in the groceries. They are sold in vacuum packed cans and labeled according to the distributor and processing company, similar to a can of peanuts or fried onions.

It is certainly no secret that bugs are high in protein. This has been the argument from the entomophagers for why we should encourage eating insects and introduce them into our diets as a great protein substitute. They are fabulous for a boost of energy as well as high in iron. Believe it or not, it would only take ten of these grubs to sustain a person daily.

At a whopping 25-53 grams of protein and 20 grams of fat, is it any wonder why these are a delicacy? For the individual on a no carb diet, the Omphisa fuscidentalis will fit the bill because they have none. They are a great tasting snack and an interesting way to spice up your plate.