The species Comadia redtenbacheri is the scientific name for the popular tequila worm languishing at the bottom of a bottle of mezcal. The larva from the Hypopta agavis moth transforms into what is known in Mexico as the common red worm. It is eaten in many ways and for different reasons throughout the world. 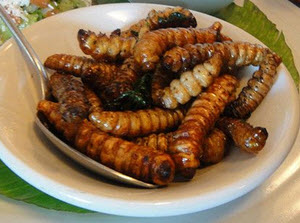 Not really a worm at all, but the larvae of the Hypopta Agavis moth, the agave worm is proposed to have hallucinogenic properties if ingested. Regardless, it has been a popular addition to tequila’s close relative mezcal since the 1950s.

The first company to have ever added a worm to its Gusano Rojo (red worm) mezcal was Nacional Vinicola. In doing so, the company changed the color and the flavor of the alcoholic beverage.

Today, there are many companies that choose to place an alcohol cured Hypopta Agavis in a bottle of mezcal, mostly as a marketing tool and gimmick. Because of this, the worm is actually an important source of income to Mexico.

The demand for these insects actually extends internationally for use in alcohol as well as cuisine. Just to give you an idea of how popular and in demand these insects are, consider the price. Just one kilogram can cost around 200.00 USD.

Since prehistoric times, Mexico’s people have been distilling spirits from the agave plant, which requires harvesting the sap. Beginning with the Aztecs, the insects were found by splitting open the center leaves of the plant. Prior to the 1950s, the primary reason for consumption of the agave worm was food as a source of high fat and for medicinal reasons.

They are found in the highlands of Mexico, in the central region where it is mostly arid. The Comadia redtenbacheri are also found in southern Texas. The younger larvae are pale reddish and only turn to a darker red upon maturation. They feed on the leaves of the agave plant and when unmolested, progress into an adult moth.

Although the larvae are just one of the types of caterpillars put into mezcal, they are consumed in many other ways. The roasted larvae of the Hypopta Agavis is the Spanish word chinicuiles. Used in traditional Mexican cuisine, as well as Spanish, the red worm is roasted and served on a heaping platter and consumed as a main dish and is an integral part of the diet in Mexico.

Spanish for the agave worm is Gusanos del Maguey, which is why it is referred to as the Maguey worm. The agave worm is used to make the popular salt around the rim of a margarita and is sold in bags for consumption. It has also started to be used as a popular ingredient in dishes like tostadas, fajitas and as any protein substitute.

The agave worm is considered to be a great dietary supplement for pregnant women, children and anyone focused on improved health. Believe it or not, prior to the worm turning into the moth, its larvae state offers a high protein and iron count. It does not taste bad either, contrary to its appearance as a squishy, plump, red worm. Safe to eat and protein rich, why not have an agave worm taco tonight?