The giant water bug is a general name for the freshwater insect group known otherwise as toe-biters. They are also affectionately referred to as alligator ticks, alligator fleas, electric-light bugs and Indian toe-biters. The scientific name for this family of bugs is belostomatidae. They are the largest and most numerous insects in their order of Hemiptera.

In Europe, the giant water bug is called a toe biter. If a human is bitten, they should be fine, but will suffer some of the most extraordinary pain from a bite. 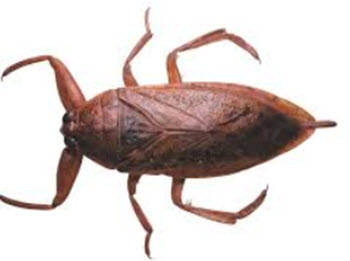 The giant water bugs are found in North and South America, East Asia and Northern Australia. They are usually about 2 centimeters long, but can grow to 12 centimeters. They are usually found in streams and ponds, preying on other bugs, small fish, tadpoles, small birds, and frogs. Though without teeth, they inject with their needle nose into their prey an enzyme to kill, making the insides of the unsuspecting victim mush.

The female giant water bug lays her eggs on vegetation just out of the waters reach.They are tended to by the male water bug and kept moist by him dripping water onto the eggs off his body. They hatch in the summer months and become full adults a year later.

Eastern asia is home to the most fierce giant water bug, although it is found all over the world in ponds, pools and marshes. It is a delicacy in Asian cuisine and hunted for food, as it hunts its own.

Watery scrambled eggs with a strong black licorice flavoring is how some people describe the fried giant water bug.

In Thailand the locals use the interior of the giant water bug, leaving their shells, for an addition to sauces. Deep fried or lightly boiled with a dash of salt is another way to eat the insects.

If you are going to eat a giant water bug by hand, the wings must be torn off. The body needs to be separated from the head. After consuming the body, the head can be squeezed to extract the meat inside.

The giant water beetle is rich in protein to the tune of about 20 grams per 3.5 ounces of serving. They are rich in iron, zinc and calcium. Because they are a rich source of protein, they can make an excellent meat substitute. Depending on the size of the giant water bug, the nutritional value varies, as some can reach 5 inches.

Should the supply of red meat, chicken or fish decrease or change, the ability to find rich sources of protein all throughout the world is still good. It would just take a shift in thinking for a large part of the western world to try to eat the giant water bug as a main dish.