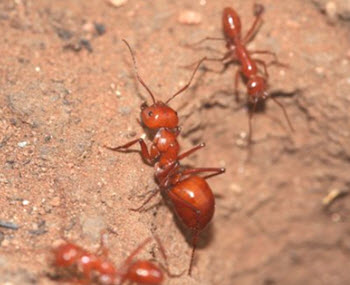 They are an extraordinary ant due to the fact that they only have a percentage of the colony that store the liquid food. When the worker ants need food, due to its scarcity, they stroke the antenna of the honeypot ant. Then, it kindly regurgitates the stored food for the worker ants to enjoy. The amazing thing about this type of ant is that it makes up half the population of the colony.

The reason for the storage ant is that life in the desert can be difficult with seasons of famine. During the dry season, there are no flowers and no nectar. So, for that time period, the storage ants are the main source of food.

Plerergtes are the fully engorged, sterile workers that act as the storehouse for the colony’s food. When they are full, they cling to the ceiling of the underground nest, and become the size of a grape. Their nests are so far into the ground that, to get to the honeypot ant, one would have to dig almost 2 meters into the ground.

If you are an aboriginal tribesman in Australia, you know exactly how to eat a honeypot ant. It is part of their diet and quite a delicacy to the indigenous people. Most just bites off the honey part of the ant which is full of good sugar and tastes sweet like honey.

If you are planning on finding the honeypot ant to try and maybe even include in a dessert recipe, think again. They are difficult to obtain and may cost close to 20 dollars for one. The reason is that most are difficult to harvest out in the deserts and indoor growers charge a premium.

The honeypot ant has sugars from the food the ant consumes. The typical foods are pollen and flower nectar which is why they taste so sweet. Occasionally, they will eat the juices of the dead invader ants that tried to get into the colony.

Ants are full of protein per ounce. In one 3.5 ounce serving, you can consume 14 grams of protein and 5.7 milligrams of iron. They are also high in calcium.

For the majority of people that chose to consume the honeypot ant, it will be for its sugary, honey pod, sans the ant body. This will reduce the nutritional value of course, but eating these ants is never really done for dietary reasons in the first place. Eating the honeypot ant is strictly for dessert.