Hungry for a grasshopper? Maybe a deep-fried cricket? Or a muffin with mealworms? 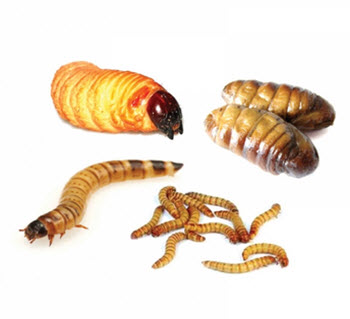 A lot of people in North America and Europe will gag at the mere thought of scarfing down worms, beetles and caterpillars. Still, we happily pay big-bucks for lobster, crayfish and oysters. Is there really a difference? Why are we more eager to eat a lobster than a mealworm, even when the mealworm is farmed in pristine conditions?

Some people claim that we, as humans, are hardwired to be appalled by the thought of eating insects, since they are associated with rotting meat that can cause food poisoning. But if that was true, why are many insects seen as a delicacy in various parts of the world? In Europe, the Sardinian maggot cheese has its loyal fans. When this cheese was outlawed by the European Union, a black market for maggot cheese emerged where the price was double that of ordinary maggot-free pecorino cheese.

When it comes to our feelings about eating insects, we are probably dealing with heavy social conditioning. If you are appealed by the idea of eating insects, it is likely because you were raised in an environment were eating insects were seen as taboo.

The story of the American Lobster

In North America, lobster was seen as a low-priced canned food well into the 20th century. New Yorkers and Bostonians had developed a taste for the lobster in the mid 19th century, and upper class families in other parts of the continent fairly soon followed in suite, but it took a long time for the rest of the population to catch on. It wasn’t really until the 1950s that the lobster became something that a large chunk of the population would be interested in having for a celebratory dinner. 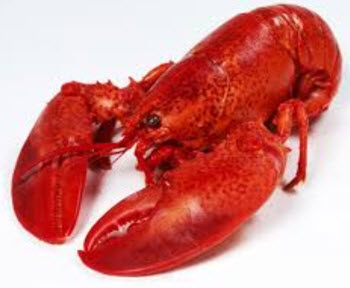 If we go back to the 17th century, many residents of the then newly formed Massachusetts Bay Colony were struggling to put food on the table. At the same time, lobsters were so abundant along the coast that these early colonists reported finding them washed up on the beach in two-foot-high piles. Native Americans in the area happily ate lobsters, and would cook them by covering them in seaweed and baking them over hot rocks. The European colonists on the other hand tried to avoid the lobsters at best they could. They saw lobsters as a food of last recourse. Servants and prisoners – who didn’t have much power when it came to deciding what to eat – were given lobster. Allegedly, indentured servants – who would serve in order to pay off debts pertaining to the cost of their journey to North America – even tried to get a clause into their service contracts that would protect them from having to eat lobster more than three times a week. Regrettably, no contracts with such a clause have survived into our time, so it is difficult to know if this legend is rooted in truth or not.

This European aversion to lobster was by no way unique to the Massachusetts Bay Colony. An abundance of lobsters – and the European colonists strong reluctance towards eating them – has been reported from various places long the coast, including areas that are today a part of Maine or of the Canadian Maritimes. In 1622, William Bradford – governor of the Plymouth Plantation – was embarrassed to admit to newly arrived colonists that the only food the struggling colony could present the new arrivals with was lobster.

Over 250 years later, this view of lobster was still widespread in the north. In 1876, a book named “The Emigrant and Sportsman in Canada: Some Experiences of An Old Country Settler” was published, written by essayist John J. Rowan. Among other things, this book tells us about how the people of Halifax spears lobster, but certainly not for fine dining. “On one occasion, I saw several acres of potato ground manured with them”, Rowan recounts. He also states that “Lobster shells about a house are looked upon as signs of poverty and degradation.”

By the time Rowan’s book was published, things had begun to change though – just not in Halifax. Instead, the railroad had made it possible for well-to-do inland city people to enjoy lobster as an exotic import from a far away shore. A product that arrived on a steam train, carefully packed in ice, was of course expensive. Instead of being associated with piles of rotting trash washed up on the beach, the lobster now attained an air of luxury.

The railroads didn’t just transport lobster – they also served lobster dishes in their glamorous restaurants. This further helped boost the lobsters reputation as a desirable and somewhat adventurous food. First class passengers dined on lobster on-board on their journeys and then started asking for it in their home towns.

For the 19th century upper-crust, the fact that a lobster can be rather messy to eat wasn’t a problem. They had servants who would remove the meat from the lobster and serve it in dishes such as molded lobster salad. This further helped associate lobster with money – it became a dish that you eat if you are rich enough to pay someone to pick out the meat for you. In New York, the Delmonico’s restaurant became famous for serving (an easy-to-eat) lobster prepared with butter, cream, eggs and Madeira, a recipe one of the Delmonico brothers had learned from a well-traveled sea captain named Ben Wenberg. (After a quarrel, the name Lobster á la Wenberg was changed to Lobster á la Newberg.)

However, for people who didn’t have a habit of traveling first class or frequenting posh restaurants like Delmonico’s, the lobster’s reputation didn’t change much in the 1800s. For the average consumer, lobster was chiefly something that you bought cheap. A report from 19th century Boston shows that grocery shoppers would pay almost five times more for baked beans than for canned lobster.

During the first two decades of the 20th century, the price of fresh lobster increased dramatically due to increased demand from restaurants in cities like New York and Chicago. After the stock market crash of 1929, the price dropped again, and lobster went back to chiefly being a cheap form of canned protein. The Great Depression also meant that families along the north-Atlantic coast would trap lobsters for their own dinner table. In many places, including Maine, old stigmas had survived, and sending your child to school with a lobster sandwich for lunch was regarded as a sign of serious financial hardship.

During World War II, many foods were rationed, but not the lobster. People of all classes ate canned and fresh lobster as a substitute for other products, and the idea that lobster could be turned into fancy dishes spread. By the 1950s, the fresh lobster was a firmly established delicacy in the United States and Canada. Old money had been enjoying lobster for a century, but now they were joined at the table by new money and an aspiring middle class.

Is smart marketing the key? 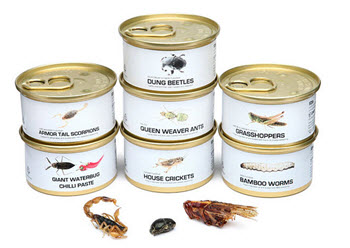 As we can see, several factors contributed to make the lobster the desirable and high-priced product that it is today – and few of them actually had much to do with how the lobster really tastes or its nutritional value.

Will we live to see insects and arachnids go through the same journey, from shunned to New Years Eve pinnacle? In many parts of the world, insects and arachnids are already a bellowed part of the local cuisine and have been since time immemorial, but consumers in Europe and North America that lacks these traditions are dragging their feet when it comes to exploring how crickets, scorpions, grasshoppers and silk pupae could add to the diet.

Maybe the insects and arachnids need a marketing campaign, something similar to what the steam-train did for the North American lobster? One of the business in the field that are currently investigating various ways of reaching out to consumers is Grub. In the mid 2010s, Grub hired media buying agency Kinetic UK and behavioral researcher Ogilvy Change to investigate methods for making the British public embrace the idea of eating insects. In a shopping center in Leeds, a stall was erected where shoppers could taste food insects for free. Three different approaches were tested to attract tasters, each one for a 2-hour period.

This is the results of the Leeds experiment:

Unless other factors played a role here, such as time of day or the staff manning the stall, it seems like messages that focuses on scarcity are the most effective ones. Such messages can trigger a persons aversion to loss.

“Fear of losing something is a powerful force and explains why sales are so effective,” said Jennie Sallows, head of insight at Kinetic UK.